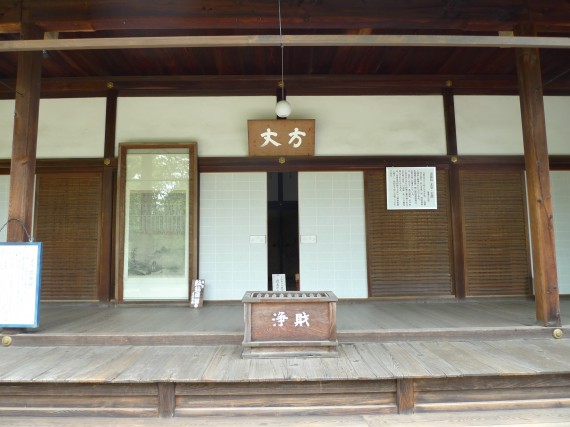 This is a joint project between Taizo-in Zen Temple and Kyoto University of Art and Design.

The two main purposes are firstly to preserve cultural properties and furthermore to train young artists.

A publically unknown young painter will finish drawing up 72fusuma-e* of the main hall of Taizo-in temple.
* Fusuma-e are the sliding paper screens that are used to divide up interior space in traditional Japanese building architecture.

Amongst its many treasures, Taizo-in houses a number of fusuma-e screens painted in the Azuchi Momoyama era (1573-1603) by the art master Kano-Ryokei. These are national important cultural properties.

These screens were drawn at the beginning of the 17th century (1600)and they are so severly damaged by age that they have been removed and now are kept in a safe. This is a common practice for temples and shrines across all over Japan. In general the original cultural properties are kept in a safe storage and replicas or plain fusuma sheets are used on display.

However, there is a danger that once this method of turning our history into a time capsule is adopted as standard practice an entire genre of art will disappear and there will be no stimulus to develop new cultural properties and the next generation of great artists will not appear.

Taizo-in felt a great deal of uneasiness about this situation, and has launched an unprecedented new project, in which a young artist will draw a new ink painting on a plain fusuma.

About four hundred years ago large temples and local warlords employed in-house artists for fusuma paintings. These artists lived in the temples and warlords’ residence, and got a thorough training in spiritual development, and also drew many masterpieces of fusuma paintings that future generations are still enjoying.

This fusuma-e project at Taizo-in has adopted the same methods as in those days. The project has an essential meaning: it takes seriously its responsibility to train and raise a young artist, and also to support the first step for the artist to launch out world wide.

Further, Taizo-in reaches out to establish new models for both preserving already existing cultural properties and creating new art legacies, and moreover making Kyoto as “the capital of Arts” appealing throughout the world.

How was the young artist chosen?

Requirements to be a painter of the fusuma-e painting project

It was decided that the painter of the project should be a young and talented artist, has some connection to Kyoto, has the courage to accomplish the project until its very end and respects religion and culture.

Taizo-in invited artists fulfilling these requirements to apply for the project, and in March 2011 Ms Yuki Murabayashi was selected from the many applicants.

Ms Murabayashi is a young vigorous artist who has engaged in painting activities based on Female Comic Art techniques.

Her works have been shown in a number of exhibitions.

History of the project 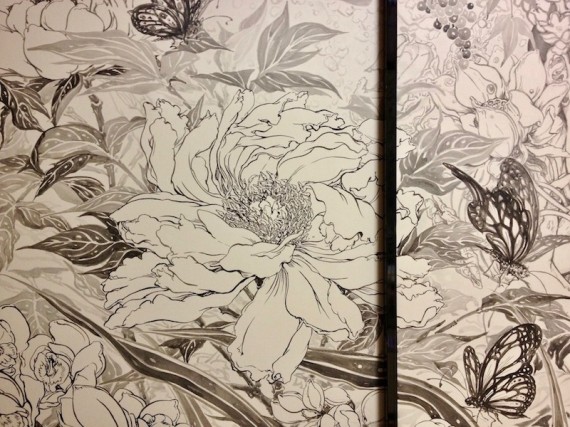 April to December 2011
・She chose materials and tools and visited artisans.
・She draw paintings on the sliding doors in her private room and temple’s kitchen for practice.

2012
・She completed paintings of Shoin guests room of Jushoin (Private) in Myoshinji.

From 2014 to the summer of 2015
・She studied classics of ink paintings and matured her idea of the paintings in Taizoin.

From the summer of 2015 to January
・She stopped her working process due to her health condition for 6 months.

From February of 2016 to now
・She recovered back to her work with drafts of fusuma-e.
・She started to commute to the temple and continues to sophisticate the idea and drafts.

※All her works are not open to the public so far.
We will let you know on the website when she will have special exhibitions.

▽Please visit her blog for detail.